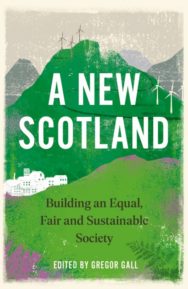 A New Scotland: Building an Equal, Fair and Sustainable Society

Inequality and unfairness still stalk Scotland after more than twenty years of devolution. Having done little to shield against austerity, Brexit and an increasingly right-wing Westminster agenda, calls for further constitutional reform to solve pressing political, economic and social problems grow ever louder. The debate over further devolution or independence continues to split the population.

In A New Scotland, leading activists and academics lay out the blueprints for radical reform, showing how society can be transformed by embedding values of democracy, social justice and environmental sustainability into a coherent set of policy ideas.

Structured in two parts, the book takes to task the challenges to affect radical change, before exploring new approaches to key questions such as healthcare, education, public ownership, race, gender and human rights.

Gregor Gall is editor of the Scottish Left Review and director of the Jimmy Reid Foundation. He is author and editor of over twenty books.