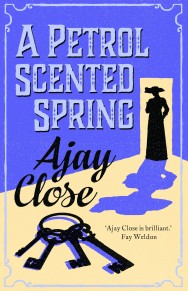 Arabella Scott, suffragette and hunger striker, is held in solitary confinement for five weeks, force-fed by the prison doctor, Hugh Ferguson Watson. Two years later, his wife, Donella, is trapped in a sexless marriage with a man haunted by the past. What happened between the doctor and his prisoner patient? Fifty years on, Donella is still trying to find out. A Petrol Scented Spring is a riveting novel of repression, jealousy and love, and the struggle for women’s emancipation.

Ajay Close is a journalist and author. Born and educated in Sheffield she took her degree from Clare College, Cambridge. As a journalist she covered the miners’ strike and Handsworth Riots. She freelanced on Woman’s Own and New Statesman, later working on Chat Magazine, Today and the North West Times. In 1988 she moved to Scotland where she has remained. Cupid’s Itch is her fifth novel.