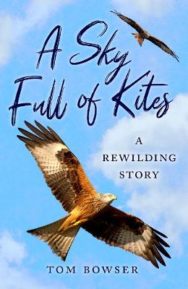 Home > Science and Nature > Natural History and Pets > A Sky Full of Kites: A Rewilding Story

A Sky Full of Kites: A Rewilding Story

Red kites were once Britain’s most common bird of prey. By the early 1900s they’d been wiped out in Scotland and England following centuries of ruthless persecution. When some reintroduced kites began roosting on their 1,400-acre farm at Argaty in Perthshire, Tom Bowser’s parents, Lynn and Niall, decided to turn their estate into a safe haven. They began feeding the birds and invited the world to come and see them, learn about them and fall in love with them.A Sky Full of Kites is the story of the Argaty Red Kite project, and the re-establishing of these magnificent raptors to Scotland, but it is also much more than that. Ill at ease with the traditional rural values of livestock farming, Lynn and Niall’s son Tom, who returned to work on the farm after a career in journalism, reveals his passion for nature and his desire to dedicate his family’s land to conservation.

Tom Bowser grew up on his parents’ Perthshire farm. After university he worked as a teacher and then as a journalist before returning to Argaty in 2009. In 2017 he took over the running of the conservation project Argaty Red Kites, and in 2018 launched the Argaty Red Squirrels project.