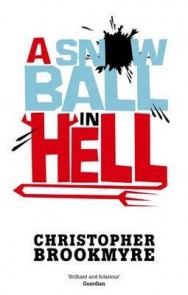 Home > Fiction from Scotland > A Snowball in Hell

A Snowball in Hell

If society has the B-list celebrities it deserves, it now has a killer to match. Except that Simon Darcourt is a great deal more successful in his career choice than the average talent show contestant. He’s also got the media taped – by the simple expedient of by-passing them completely and posting real-time coverage of his killings on the internet. He’s got viewing figures to make the world’s TV executives gasp in envy, and he’s pulling the voyeuristic strings of every viewer by getting them to ‘vote’ to keep his captives alive. Angelique De Xavier, his previous nemesis, is drafted onto the police team trying to bring this one-man celebrity hate-fest to an end. But she can’t do it alone, she needs the magical skills of her lover, only she doesn’t know where Zal is and meanwhile a whole load of celebs are, literarly, dying to be famous. An intelligent satire, a thriller with exhilarating pace – Christopher Brookmyre at his best.

Reviews of A Snowball in Hell

Brookmyre is back to what he does better than anyone else: bloodgushing action married to razor-sharp, foul-mouthed satire that shows he doesn't so much have his finger on the pulse of popular culture as an open razor to its carotid artery' Daily Express 'A bracing read from a writer who rugby-tackles contemporary issues with vim and black wit The London Paper 'A cult classic in waiting' Aberdeen Press & Journal 'A thriller that entertains to the final page Financial Times 'Prepare for a few hours of remote-control-free, evil brilliance' Daily Record 'Brilliant and hilarious' Guardian

Christopher Brookmyre was a journalist before becoming a full time novelist. He is the winner of the 2007 Glenfiddich Spirit of Scotland Award, and his novel All Fun and Games Until Somebody Loses an Eye won the 2006 Bollinger Everyman Wodehouse Award for Comic Fiction.