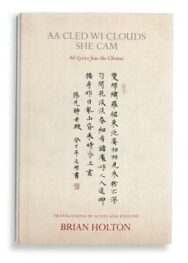 Brian Holton is unique in that he can translate directly into Scots from the Chinese. This anthology consists of translations into Scots and English of the first sixty poems of the standard anthology Song Ci Sanbaishou(“300 Song Dynasty Song Lyrics”), edited by Zhu Zumou (1924), with a Translator’s Afterword/Owresetter’s Eftirword.In China, the “300 Song Ci” is the standard anthology for high school and undergraduate students. This book introduces Scots (and English) speakers to one of the major genres of Chinese lyric verse. This genre appeared in the ninth century, during the late Tang Dynasty, but is generally considered to have reached its full flowering in the following Song Dynasty (960-1279CE).Among the most elegant and beautiful texts written in any language, these lyrics are of particular interest in that they demonstrate the multum in parvo (less is mair) principle: like Chinese calligraphy or landscape painting, great and subtle effects result from a high artfulness that looks artless. The two main schools of Song Ci are the heroic (haofang) and the delicately restrained (wanyue). They are also technically interesting, each being written to the irregular metrical structure of one of a selection of 800-odd models, each of which was derived from an existing song form, often from Central Asia. The authors include masters such as Fan Zhongyan (989-1052), Ouyang Xiu (1007-1072), Liu Yong (987-1053), and Yan Jidao (1031-1106), as well as lesser-known writers.

Holton, born in Galashiels in 1949, and educated at the Universities of Edinburgh and Durham, has published twenty books of translated poetry, including Yang Lian’s Venice Elegy (Edizioni Damocle, 2019) and Narrative Poem (Bloodaxe Books, 2017). In 2021, he was awarded the inaugural Sarah McGuire Prize for Poetry Translation for Yang Lian’s Anniver- sary Snow (Shearsman Books, 2019). Holton’s collection of classical poems in Scots, Staunin Ma Lane, was published by Shearsman Books in 2016, and his Hard Roads an Cauld Hairst Winds: Li Bai an Du Fu in Scots by Taproot Press in early 2022. He has won other prizes both for his own poetry in Scots and for his translations into both Scots and English. He is a recovering academic who taught Chinese language and literature at Edinburgh, Durham and Newcastle, and translation at Newcastle and the Hong Kong Polytechnic University. He has given lectures, readings and workshops at universities and major literary festivals in the UK, Spain, Italy, Holland, New Zealand, China, the USA, and Canada. He lives in Melrose in the Scottish Borders, close to where he was born.