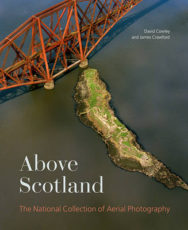 Home > Travel > Above Scotland: The National Collection of Aerial Photography

Above Scotland: The National Collection of Aerial Photography

The landscape of Scotland is full of dramatic contrasts. The high, rugged peaks of the Cairngorms look down on the rounded hills of the southern uplands. Wild moorlands run into fertile flood-plains. The coastline ranges from soft sandy beaches and crystal-clear waters to jagged cliffs battered by the fierce waves of the Atlantic. Aerial photography provides unique and striking perspectives on how the people of Scotland have lived, worked, fought over, worshipped, developed and changed this land, leaving no part untouched or unaltered by human activity. The Royal Commission on the Ancient and Historical Monuments of Scotland (RCAHMS) holds the national collection of aerial photography for Scotland with millions of images dating from the 1920s to the present day. These photographs – many of which have never been seen before by the public – tell the remarkable story of a changing nation, from stone circles, Roman remains and ruined castles, to the growth of villages, towns and cities, the rise and fall of heavy industry, the country at war and the proud engineering and architecture of the modern landscape.For the first time in one volume, RCAHMS has brought together the finest images from its collection in a stunning illustration of Scotland’s past, present and future.