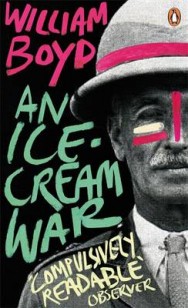 An Ice-Cream War is William Boyd’s sparkling debut novel on the grimly comic side of conflict, published as a Penguin Essential for the first time. ‘What do you think would happen if I shot an elephant in the balls?’ ‘I think it would hurt a great deal.’ Millions die on the Western Front but in East Africa a quite different war is being waged – one with little point and which is so ignored that it will carry on after the Armistice because no one bothers to tell both sides to stop. As the conflict sweeps up natives and colonials, so those left at home and those fighting abroad find themselves unable to escape the tide of history bearing down on them.