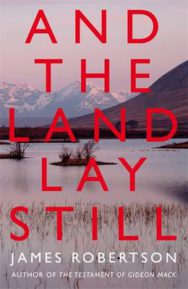 Home > Fiction from Scotland > And the Land Lay Still

And the Land Lay Still

Michael Pendreich is curating an exhibition of photographs by his late, celebrated father Angus for the National Gallery of Photography in Edinburgh. The show will cover fifty years of Scottish life but, as he arranges the images and writes his catalogue essay, what story is Michael really trying to tell: his father’s, his own or that of Scotland itself? And what of the stories of the individuals captured by Angus Pendreich’s lens over all those decades? The homeless wanderer collecting pebbles; the Second World War veteran and the Asian shopkeeper, fighting to make better lives for their families; the Conservative MP with a secret passion, and his drop-out sister, vengeful against class privilege; the alcoholic intelligence officer betrayed on all sides, not least by his own inadequacy; and, the activists fighting for Scottish Home Rule – all have their own tales to tell. Tracing the intertwined lives of an unforgettable cast of characters, James Robertson’s new novel is a searching journey into the heart of a country of high hopes and unfulfilled dreams, private compromises and hidden agendas.Brilliantly blending the personal and the political, “And The Land Stay Still” sweeps away the dust and grime of the postwar years to reveal a rich mosaic of 20th-century Scottish life.