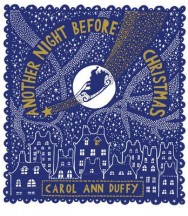 Another Night Before Christmas

On the night before Christmas, A child in a house, As the whole family slept, Behaved just like a mouse …It’s the night before Christmas and a young girl creeps down the stairs, determined to find out for certain whether Santa is real …But try as she might, she can’t keep awake and is soon fast asleep. She doesn’t stir, even when Santa and his reindeer land on her roof-top but then, when he bursts out of her fireplace, she wakes to a room filled with magic. As she watches him fly off into the night, she knows that she will never forget this sight because, at Christmas, the best gift of all is belief. Carol Ann Duffy’s twenty-first-century reworking of the Victorian Christmas classic is filled with her characteristic warmth, wit and imagination and, illustrated by the sophisticated, romantic and truly original Rob Ryan, it will be the perfect gift this Christmas.

Carol Ann Duffy lives in Manchester, where she is Professor and Creative Director of The Writing School at Manchester Metropolitan University. She has written for both children and adults, and her poetry has received many awards, including the Signal Prize for Children’s Verse, the Whitbread and Forward Prizes, and the Lannan and E. M. Forster Prize in America. In 2005, she won the T. S. Eliot Prize for Rapture. She was appointed Poet Laureate in 2009.