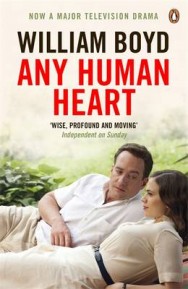 “Any Human Heart” is William’s Boyd’s classic, bestselling novel – now a major Channel 4 drama. Every life is both ordinary and extraordinary, but Logan Mountstuart’s – lived from the beginning to the end of the twentieth century – contains more than its fair share of both. As a writer who finds inspiration with Hemingway in Paris and Virginia Woolf in London, as a spy recruited by Ian Fleming and betrayed in the war and as an art-dealer in ’60s New York, Logan mixes with the movers and shakers of his times. But as a son, friend, lover and husband, he makes the same mistakes we all do in our search for happiness. Here, then, is the story of a life lived to the full – and a journey deep into a very human heart. “Any Human Heart” will be enjoyed by readers of Sebastian Faulks, Nick Hornby and Hilary Mantel, as well as lovers of the finest British and historical fiction around the world. It was recently adapted for a major Channel 4 four-part drama series scripted by William Boyd and starring Kim Cattrall, Gillian Anderson, Jim Broadbent and Tom Hollander. This edition features beautiful cover artwork from the television series. “Astonishing, touching, extremely funny.A brilliant evocation of a past era and an immensely readable story”. (“Sunday Telegraph”). “Superb, wonderful, enjoyable”. (“Guardian”). “A terrific journey through the twentieth century. Thoroughly entertaining and enjoyable”. (Jeremy Paxman). William Boyd was born in Ghana, where his father was a doctor, and was educated there and in Scotland. His first novel “A Good Man in Africa” won both the Whitbread First Novel and Somerset Maugham Prizes, and his subsequent novels have gone onto win many awards. His books include: “On the Yankee Station and Other Stories”, “An Ice-Cream War”, “Stars and Bars”, “School Ties”, “The New Confessions”, “Brazzaville Beach”, “The Blue Afternoon”, “The Destiny of Natalie ‘X’ and Other Stories”, “Armadillo”, “Nat Tate: An American Artist 1928-1960”, “Any Human Heart”, “Restless”, “The Dreams of Bethany Mellmoth”, “Ordinary Thunderstorms”, “Fascination”, “Bamboo” and “Waiting for Sunrise”. He divides his time between London and south-west France.

William Boyd was born in Ghana, where his father was a doctor, and was educated there and in Scotland. His first novel A Good Man in Africa won both the Whitbread First Novel and Somerset Maugham Prizes, and his subsequent novels have gone on to win many awards. He devides his time between London and south-west France.