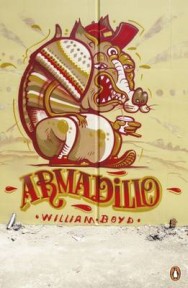 William Boyd’s Armadillo – part of the limited edition Pengiun Street Art series: timeless writing, enduring design. ‘A young man not much over thirty, tall with ink-dark hair and a serious-looking, fine-featured but pallid face, went to keep a business appointment and discovered a hanged man.’ Lorimer Black – young, good-looking, but with a somewhat troubled expression – does not understand why his world is being torn apart, though he does know that for the most part it is made up of bluster and hypocrisy. His business, trying to keep insurance companies from paying out the money they’ve promised, is a con game run with the protection of the law. One winter’s morning, Lorimer goes to keep a perfectly routine business appointment and finds a hanged man. A bad start to the day, by any standards, and an ominous portent of things to come. “Armadillo doesn’t miss a trick. It has depth and resonance which will make you want to read it again …zinging readability”. (Mail on Sunday). William Boyd was born in 1952 in Accra, Ghana and grew up there and in Nigeria. His first novel, A Good Man in Africa (1981), won the Whitbread First Novel Award and the Somerset Maugham Prize.His other novels are An Ice Cream War (1982, shortlisted for the 1982 Booker Prize and winner of the John Llewellyn Rhys Prize), Stars and Bars (1984), The New Confessions (1987), Brazzaville Beach (1990, winner of the McVitie Prize and the James Tait Black Memorial Prize), The Blue Afternoon (1993, winner of the 1993 Sunday Express Book of the Year Award), Armadillo (1998), Any Human Heart (2002, winner of the Prix Jean Monnet) and Restless (2006, winner of the Costa Novel of the Year Award). His latest novel is Ordinary Thunderstorms (2009). Some thirteen of his screenplays have been filmed, including The Trench (1999), which he also directed, and he is also the author of four collections of short stories: On the Yankee Station (1981), The Destiny of Nathalie ‘X’ (1995), Fascination (2004) and The Dream Lover (2008). He is married and divides his time between London and South West France. The Pengiun Street Art series marries timeless writing with enduring design.Some of the world’s leading street artists have designed new covers especially for ten classic contemporary books from Penguin: Hawksmoor by Peter Ackroyd; Armadillo by William Boyd; And The Ass Saw the Angel by Nick Cave; What a Carve Up by Jonathan Coe; Americana by Don DeLillo; Then We Came to the End by Joshua Ferris; The Reluctant Fundamentalist by Mohsin Hamid; The Believers by Zoe Heller; How to Be Good by Nick Hornby; and Lights out for the Territory by Iain Sinclair.

A novel that is truly comic, and, like all true comedy, also disturbing Scotsman Marvellously paced and ingeniously plotted. A real page-turner Observer Armadillo doesn't miss a trick. It has depth and resonance which will make you want to read it again … zinging readability Mail on Sunday A joy to read: east to get into, addictively plotted and beautifully written Daily Mail As entertaining and as thought-provoking as anything Boyd has ever written Daily Telegraph