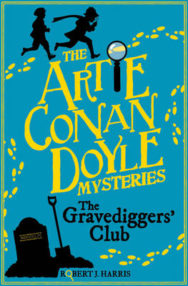 One day Arthur Conan Doyle will create the greatest detective of all — Sherlock Holmes. But right now Artie Conan Doyle is a twelve-year-old Edinburgh schoolboy with a mystery of his own to solve. While sneaking out to explore Greyfriars Kirkyard by night, Artie and his best friend Ham spot a ghostly lady in grey and discover the footprints of a gigantic hound. Could the two mysteries be connected? These strange clues lead them to a series of robberies carried out by the sinister Gravediggers’ Club and soon they find themselves pitted against the villainous Colonel Braxton Dash. Will Artie survive his encounters with graveyards and ghosts in the foggy streets of nineteenth century Edinburgh — or will his first case be his last? Robert J. Harris, author of The World’s Gone Loki series and William Shakespeare and the Pirate’s Fire, brings the young Conan Doyle to life in this ingenious detective story full of twists, turns and clever reveals.

Reviews of Artie Conan Doyle and the Gravediggers’ Club

'This exciting tale follows the fictional adventures of a young Arthur Conan Doyle (author of the Sherlock Holmes books) & his mate Ham. When graves are robbed all over Edinburgh with the bodies being abandoned later he deduces that the crooks must be after something else the graves might contain. With several nods to the original stories this is a hugely enjoyable crime mystery which this huge Holmes fan absolutely loved.' — Lara Mieduniecki, Blackwell's 'I LOVED IT! As a fan of the original Sherlock Holmes books I thought the characterisation of these books were spot on! … Yet at the same time they didn't lose their own identity and had their own character quirks. There are also lots of other nods to the original tales which both serves to please any Holmes fan but does not take away from the books individuality and enjoyment so any Holmes novice would be able to enjoy them for their own. A perfect combination of a classic mystery and a new adventure.' — Sharleen Creasey, Seven Stories 'Even as an adult I liked this story and hope more will be coming out. I'm particularly looking forward to getting my son to read this so we can talk about the story. It was just very refreshing to be able to find something for my son that he can read which is both fun and has an educational tone to it by teaching kids to be more observant.' — Artistic Bent blog

Robert J. Harris was born in Dundee and now lives in St Andrews with his wife, sons and his dog. He is the author of many children’s books, including Will Shakespeare and the Pirate’s Fire, Leonardo and the Death Machine and zany Norse-god trilogy The World’s Gone Loki!.