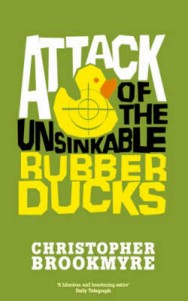 Home > Fiction from Scotland > Attack of the Unsinkable Rubber Ducks

Attack of the Unsinkable Rubber Ducks

Do you believe in ghosts? Do we really live on in some conscious form after we die, and is that form capable of communicating with the world of the living?…Aye, right. That was Jack Parlabane’s stance on the matter, anyway. But this was before he found himself in the more compromising position of being not only dead himself, but worse: dead with an exclusive still to file. From his position on high, Parlabane relates the events leading up to his demise, largely concerning the efforts of charismatic psychic Gabriel Lafayette to reconcile the scientific with the spiritual by submitting to controlled laboratory tests. Parlabane is brought in as an observer, due to his capacities as both a sceptic and an expert on deception, but he soon finds his certainties crumbling and his assumptions turned upside down as he encounters phenomena for which he can deduce no rational explanation. Perhaps, in a world in which he can find himself elected rector of an esteemed Scottish university, anything truly is possible. One thing he knows for certain, however: Death is not the end – it’s the ultimate undercover assignment.

Reviews of Attack of the Unsinkable Rubber Ducks

Sharply satirical and poignantly funny, this is a gripping and highly entertaining read. Time Out Chris Brookmyre is a genius. Mirror Brookmyre has no equal. Maxim Exhilerating linguistic fluency and keenly subversive intelligence Scotland on Sunday

Christopher Brookmyre lives near Glasgow with his wife, his son and his St Mirren season ticket. He is the winner of the 2007 Glenfiddich Spirit of Scotland Award for Writing, and his novel All Fun and Games Until Somebody Loses an Eye won the 2006 Bollinger Everyman Wodehouse Award for Comic Fiction.