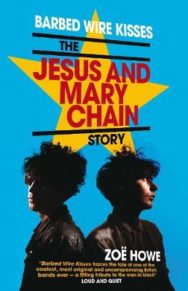 Musically, culturally and in terms of sheer attitude, The Jesus and Mary Chain stand alone. Their seminal debut album Psychocandy changed the course of popular music with its iconic blend of psychotic white noise, darkly surreal lyrics and pop sensibility, and the band continue to enchant and confound.This fierce, frank and often funny tale begins in the faceless new town of East Kilbride, near Glasgow, at the dawn of the 1980s with two chronically shy brothers, Jim and William Reid, listening to music in their shared bedroom. What follows charts the formation of The Jesus and Mary Chain, their incendiary live performances, their relationship with Alan McGee’s Creation Records and those famous fraternal tensions that prepared McGee for the onslaught of the Gallaghers, with plenty of feedback, fighting and, most importantly, perfectly crafted pop along the way. It is time this vastly influential group and sometime `public enemy’ had their say.

Zoe Howe is a music author whose other books include the acclaimed Typical Girls? The Story of the Slits, `How’s Your Dad?’ Living in the Shadow of a Rock Star Parent, British Beat Explosion: Rock n’ Roll Island, and Dr Feelgood guitarist Wilko Johnson’s memoir Looking Back at Me. Her writing has also appeared in The Quietus, Company, Notion, BBC Music, Holy Moly, Classic Rock and NME. Zoe has also made music radio series for stations including the award-winning Resonance FM, and she can be heard talking about rock n’ roll from time to time on BBC 6 Music, Absolute Radio, Planet Rock, BBC London and elsewhere.