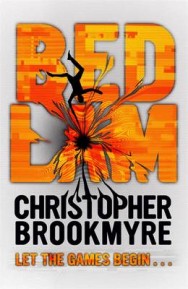 HEAVEN IS A PRISON. HELL IS A PLAYGROUND. Ross Baker is an overworked scientist developing medical technology for corporate giant Neurosphere, but he’d rather be playing computer games than dealing with his nightmare boss or slacker co-workers. He volunteers as a test candidate for the new tech – anything to get out of the office for a few hours. But when he emerges from the scanner he discovers he’s not only escaped the office, but possibly escaped real life for good. He’s trapped in Starfire – a video game he played as a child – with no explanation, no backup and, most terrifyingly, no way out.

A fascinating, fast-paced but thoughtful blend of science fiction and techno-thriller — Iain M. Banks Funny jokes, characters you can empathise with and devastatingly employed swear words — Ed Byrne (Comedian) Christopher Brookmyre hits another high score with this brilliant, fast-paced gamer's nightmare — Charles Stross One of the funniest writers in Britain Guardian BEDLAM is what Brookmyre does best — Diana Gabaldon

Christopher Brookmyre has firmly established himself as one of Britain’s leading crime novelists. He says this hasn’t stopped his fans from asking him to write something more futuristic instead, and he hopes they have as much fun reading Bedlam as he did writing it. Life is just a game, after all … Christopher is developing a computer game based on Bedlam with a UK-based games company Redbedlam, due for release in 2014.