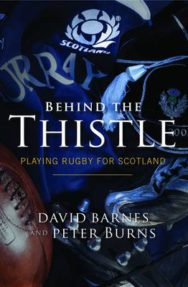 Behind the Thistle: Playing Rugby for Scotland

Based on exclusive interviews with players past and present, Behind the Thistle gives a unique insight into the drama and emotion of representing Scotland in that most rarefied of environments – Test match rugby. Drawing on first-hand interviews from a vast array of former and current players, from Russell Bruce and Frank Coutts in the 1940s, all the way through to the present day, the authors uncover the heart and soul of Scottish rugby, recounting the ecstasy of victory and the despair of defeat, drawing out innumerable humorous anecdotes and heart-warming memories. Behind the Thistle presents an inside access to the private moments in the changing and team rooms, on tour, and on the pitch itself. From the tension before kick-off to the tumultuous heat-of-battle and the high-jinx thereafter, this is the story of what it is like to play for Scotland, the sacrifices and joys experienced by those who have shed blood, sweat and tears in pursuit of glory in the international jersey. Absorbing, illuminating and compelling, this is a must-have for all supporters who have dreamed the dream of playing for Scotland.

David Barnes is a freelance journalist, covering club, pro-team and international rugby for various Scottish newspapers. In 2008, he was shortlisted for Rugby Book of the Year at the British Sports Book Awards for The Accies: The Cradle of Scottish Rugby. He lives in Edinburgh. Peter Burns was born and brought up in Edinburgh and educated at the Edinburgh Academy. He read English at St Andrews University and then returned to Edinburgh to complete a Masters in Publishing. He is now Sports Editor and Digital Deveolpment Manager for Birlinn Ltd.