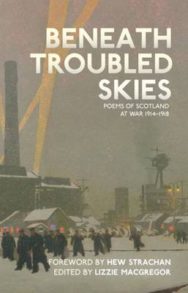 The story of Scotland at war in the poetry of the time, in English, Gaelic and Scots, by servicemen, volunteers, and those on the home front. Well-known soldier poets like E.A. Mackintosh, Domhnall Ruadh Choruna and Joseph Lee are joined by others who fought with their pens to chronicle and comment on the war, among them Mary Symon, Neil Munro and Margaret Sackville. The book is in chronological order, following the war as it develops, with introductions to each year by Yvonne McEwen. From the very first ‘Sough o’ War’ sweeping through the land to conflicting attitudes to volunteering; from the despair of the trenches to the anguish of the bereaved; from unexpected humour to hatred to comradeship; from women at work to men shattered by conflict; from the appalling tragedies of Gretna and the Iolaire to sorrow for a generation cast into the fire, and a last angry condemnation of the human race. This anthology traces the progress of Scotland’s war through poetry written by serving soldiers and those on the home front. Includes Charles Hamilton Sorley, E.A. Mackintosh, R.Watson Kerr, Joseph Lee, Charles Murray, May Wedderburn Cannan, Mary Symon.

Sir Hew Strachan is currently Chichele Professor of the History of War at the University of Oxford, a member of the National Committee for the Centenary of the First World War, and a Commissioner of the Commonwealth War Graves Commission. He is the author of numerous works of military history, including a magisterial first volume of a history of the First World War, To Arms.;Lizzie MacGregor is the Assistant Librarian of the Scottish Poetry Library, and editor of several popular anthologies co-published by the SPL and Polygon, including Handfast: Scottish poems for weddings and affirmations, Lament: Scottish poems for funerals and consolation; and Luckenbooth, an anthology of Edinburgh poetry.; Yvonne McEwen is currently the Project Director of Scotland’s War 1914-1919 at the Centre for the Study of Modern Conflict at the University of Edinburgh. Her study In the Company of Nurses: The British Army Nursing Service in the Great War was published by Edinburgh University Press in 2014.