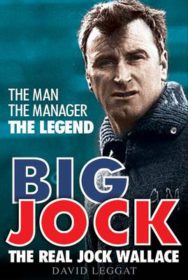 Jock Wallace wasn’t just one of Scotland’s outstanding football managers – he was a legend. A larger-than-life character, a giant of a man and a real-life hero, Wallace lived an extraordinary life. Though only an average goalkeeper who never made it as a player, he lived the football dream when he went on to manage Rangers twice, winning a whole host of trophies, including two Trebles in three seasons in the mid-seventies. But the road to the top was a tough one for big Jock, including a spell as a jungle fighter with the King’s Own Scottish Borderers in war-torn Malaya, and in his fifties he was struck down by Parkinson’s disease. In the end, the strain proved too much even for Wallace and he died of a heart attack aged only sixty-two. In this fascinating biography, David Leggat, one of the few journalists who was close to Big Jock, tells his incredible story.