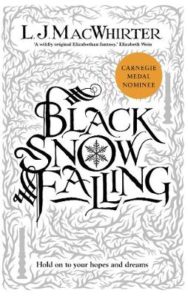 This is a clearly told yet imaginative story with an epic sweep. Characters – even the smallest – are the opposite of cardboard cut-outs, but given as much psychological complexity as is congruent with such a fast-flowing story.It starts out on quite a small scale, with two stories 50 years apart. In 1592, Ruth, a 14-year old daughter of absent earl, is about to married off against her will by a hated stepmother. Fifty years earlier, a candle-maker’s son called Jude falls foul of Henry VIII and is lucky to escape with his life.Before the main plot kicks into gear, the reader is left wondering how both of those strands could possibly be linked. Early on, the novel looks as though it is could be a story about the risks Ruth is running in defying convention by falling in love with a stable boy called Silas. Or maybe it’s going to be about the clash between science and authority, as the cause of Jude nearly losing his head 50 years previously after daring ton suggest to Henry VIII that maybe the Earth really did orbit the Sun.But no: instead, the story is about what the title says: Black Snow Falling. Because that’s what the effect seems to be as when the shadowy dream thieves go to work. And it is only when one sees their ship anchored a mile in the sky that one begins to appreciate the novel’s ambition. It isn’t just going to be about one person touched by some sort of magic, or insight, or – in this case, soul-shrivelling loss of hope. That will be something that could apply to all of its characters, and indeed (because the dream-thieves’ ship sails into different centuries) all of its readers too. Because the opposite of dream-stealing, then now, is defying convention and living with hope.Fort a novel of such capacious imagination, Black Snow Falling also has a deep sense of history and its protagonists have a satisfyingly complex characterisation. It’s rare to find all three at once in YA fiction, let alone fused together so effectively, and in all my time as The Scotsman’s books editor (15 years and another 10 as deputy) I don’t think I ever have. I recommend it highly.David RobinsonBooks Editor, The Scotsman 2000-15 — David Robinson

LJ MacWhirter is an international award-winning advertising copywriter and an accomplished presenter. Black Snow Falling is her debut novel for young adults. She lives in Edinburgh with her family.