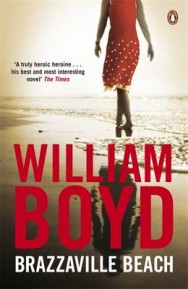 “Brazzaville Beach” is a classic award-winning novel by William Boyd. It is winner of the prestigious James Tait Black Memorial Prize. ‘I live on Brazzaville Beach…I am here because two sets of strange and extraordinary events happened to me…One in England, first, and then one in Africa.’ On Brazzaville Beach, on the edge of Africa, Hope Clearwater examines the complex circumstances that brought her there. Sifting the details for evidence of her own innocence or guilt, she tells her engrossing story with a blunt and beguiling honesty that not only intrigues and disturbs but is also completely enthralling. “Brazzaville Beach” will be loved by fans of Any Human Heart, as well as readers of Ben Macintyre, Sebastian Faulks, Nick Hornby and Hilary Mantel. “”Brazzaville Beach” exudes confidence; Boyd has grown in authority from book to book. Things are by turn hilarious and edgy but always under control”. (“Sunday Times”). “A brilliant storyteller …a book which stretches, tantalizes and delights”. (“Financial Times”). “As intelligent as anything you’re likely to read …slips by like a thriller”. (“Time Out”). “A most extraordinary parable about mankind …quite unlike anything else I have ever read”.(“Sunday Express”). William Boyd was born in Ghana, where his father was a doctor, and was educated there and in Scotland. His first novel “A Good Man in Africa” won both the Whitbread First Novel and Somerset Maugham Prizes, and his subsequent novels have gone onto win many awards. His books include: “On the Yankee Station and Other Stories”, “An Ice-Cream War”, “Stars and Bars”, “School Ties”, “The New Confessions”, “The Blue Afternoon”, “The Destiny of Natalie ‘X’ and Other Stories”, “Armadillo”, “Nat Tate: An American Artist 1928-1960”, “Any Human Heart”, “Restless”, “The Dreams of Bethany Mellmoth”, “Ordinary Thunderstorms”, “Fascination”, “Bamboo” and “Waiting for Sunrise”. He divides his time between London and south-west France.