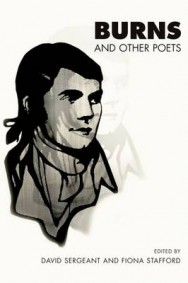 Home > Academic > Arts and Humanities > Burns and Other Poets

Burns and Other Poets

New essays on Burns’ special place in Scottish, English and Irish literary culture In this volume, 17 leading Burns scholars, poetry critics and practising poets reflect on the enduring significance of one of the most important poets of the 18th century. They show that Burns was a highly innovative and technically accomplished poet, as capable of transforming earlier traditions as of launching new literary trends. Looks at Burns’ place amongst his literary predecessors, contemporaries and heirs, including: * Scottish poets such as Ramsay, Fergusson, Byron, Hogg, MacDiarmid, Paterson, Dunn & Mackay Brown * English poets such as Milton, Addison, Gray & Wordsworth * Classical writers such as Virgil * Irish poets such as Merriman, Goldsmith, Dermody & Heaney By looking at Burns in the context of other poets, each chapter sheds new light on his own practices and the practice of poetry in general. They investigate the political, national, philosophical and ethical aspects of his poetry, showing how you can deepen your close readings with historical awareness.Key Features * Contributors include leading poet-critics such as award-winning Burns author Robert Crawford & Douglas Dunn, and experts in poetry criticism such as Stephen Gill & Patrick Crotty * Includes two exclusive new poems written for the volume by Bernard O’Donoghue and Andrew McNeillie * Creative-critical discussions will generate new dialogues in Romanticism, Archipelagic Studies and Scottish, English and Irish literature

David Sergeant is a Junior Research Fellow in English at Somerville College, Oxford. Fiona Stafford is Professor of English Language and Literature at the University of Oxford. She has published widely on Romantic literature, Scottish and Irish literature and poetic dialogues. She is a Fellow of the Royal Society of Edinburgh and the Robert Burns Centre in Glasgow. Her books include Local Attachments (OUP, 2010); Brief Lives: Jane Austen (Hesperus, 2008); Starting Lines in Scottish, Irish and English Poetry, from Burns to Heaney (OUP, 2000); The Last of the Race (OUP, 1994); The Sublime Savage: James Macpherson and the Poems of Ossian (EUP, 1988).