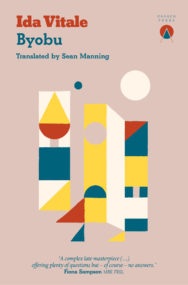 Byobu is an intimate work filled with poetry and knowledge, densely interwoven without pretension, born of a single force: curiosity. As a book, it’s representative of the modesty and complexity of Vitale’s poetic universe. Byobu (from the Japanese word byōbu meaning literally a ‘wind wall’, i.e. a folding screen) is the protagonist in this treatise on the senses comprised of thirty-three contemplative episodes and a final section of aphoristic thoughts. Bybou is less a physical character, than a spiritual one, a consciousness revealing its rich inner world, which is, in fact, driven by its meticulous attention to our rich outer world. The insights afforded the readers certainly lead them to see Byobu as a folding screen behind which resides his universe of behaviours, worries, curiosities, pleasures, peculiarities, and efforts to understand.

‘There is a story,’ reads the opening sentence, speaking existence into the swirling unclaimed adventures waiting for us to notice them. And imagine the adventures that have materialized throughout Vitale’s ninety-seven years and with which Byobu is constructed. The result is a wandering inventory of discoveries, realisations, and confessions that rescue the often unnoticed, or considered useless, corners of the earth and our experiences of them. From earthworms to toads, chrysanthemums to butcher’s broom, stoplights to crossroads, to memories, misunderstandings, and forgetfulness, Byobu offers ‘a journey both mysterious and epiphanic. Signposted by exquisite vocabulary and writing that is not simple, where each word possesses its own weight and music’ (El País).

Ida Vitale (Uruguay, 1923) is a poet, translator, essayist, and literary critic. In 2018, she was just the fifth woman to receive the prestigious Miguel de Cervantes Prize, the highest recognition for literature in Spanish. In addition to the Cervantes Prize, she has also received the FIL Literature Prize (2018), Max Jacob Prize (2017), Federico García Lorca Poetry Prize (2016), Reina Sofía Poetry Prize (2015), Alfonse Reyes Prize (2014), and Octavio Paz Prize (2009), as well as many other honours, including being named by the BBC as one of the 100 most influential women of 2019.

Sean Manning is a translator and lecturer in the Department of Spanish and Portuguese at the University of Texas at Austin, where he teaches courses on language, literature, and writing. He has a PhD in Spanish and Latin American literature specializing in poetic apprenticeship. His translations include works by Ricardo Piglia, Diego Vecchio, and Ana Luz García, as well as Lorenzo García Vega’s Falconry with Puppets, Eduardo Lalo’s The Elements, Azahara Palomeque’s American Poems, Carlos Pereda’s Lessons in Exile, and Alejandro Pérez’s ‘Ima’ and ‘Coli’ Are the Tree That Was Never a Seed, recipient of the 2020 Paz Prize for Poetry. His translations have appeared in Asymptote, Exchanges, and AzonaL.