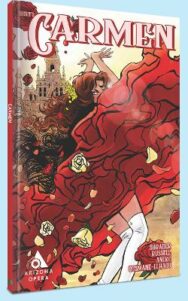 Adapted as a graphic novel by tenor, director, and writer Alek Shrader, with layout and page design by legendary artist P. Craig Russell (Neil Gaiman’s American Gods), illustrations by the acclaimed artist Aneke Murillenem (Bylines in Blood), and lettering by Hassan Otsmane-Elhaou. This epic hardcover graphic novel features a stunning cover illustrated by Aneke.Perhaps the most famous opera in history, Georges Bizet’s CARMEN premiered in 1875 at the Opera-Comique in Paris. The four-act opera, featuring a libretto written by Henri Meilhac and Ludovic Halevy and adapted from the novella by Prosper Merimee, remains one of the most exciting and popular works in the repertoire. Now, nearly 150 years after its premiere, Arizona Opera is presenting the story of Carmen, adapted as a graphic novel.