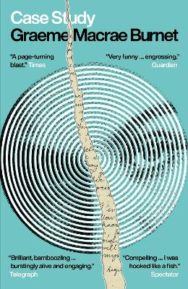 “I have decided to write down everything that happens, because I feel, I suppose, I may be putting myself in danger.”London, 1965. An unworldly young woman believes that a charismatic psychotherapist, Collins Braithwaite, has driven her sister to suicide. Intent on confirming her suspicions, she assumes a false identity and presents herself to him as a client, recording her experiences in a series of notebooks. But she soon finds herself drawn into a world in which she can no longer be certain of anything. Even her own character.In Case Study, Graeme Macrae Burnet presents these notebooks interspersed with his own biographical research into Collins Braithwaite. The result is a dazzling – and often wickedly humorous – meditation on the nature of sanity, identity and truth itself, by one of the most inventive novelists writing today.

Graeme Macrae Burnet is among Scotland’s leading contemporary novelists. He lives and works in Glasgow, where he studied English literature, before studying further at the University of St Andrews and then working in television and teaching overseas. In 2013 he was awarded a Scottish Book Trust New Writers Award, and he now writes full-time. Best known for his dazzling Booker-shortlisted second novel, His Bloody Project (2015), he is also the author of two novels set in France and written in a style influenced by the Belgian novelist Georges Simenon: The Disappearance of Adele Bedeau (2014) and The Accident on the A35 (2017). His fourth novel, Case Study (2021), consists of a series of notebooks apparently sent to the author in 2020 to aid his research into a rogue 1960s psychotherapist. The notebooks reveal the story of a young woman convinced that this charismatic therapist was responsible for her sister’s suicide. Determined to get to the bottom of his role in her sister’s death, she assumes an alter ego and presents herself as a client to him. Graeme has appeared at literary festivals in Australia, the USA, Germany, India, Russia, Spain, France, Korea, Denmark and Estonia. His novels have been translated into more than 20 languages and achieved bestseller status in several countries.