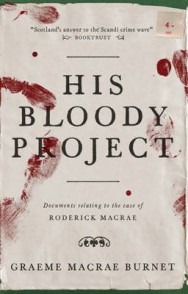 Documents relating to the case of Roderick Macrae. A brutal triple murder in a remote northwestern crofting community in 1869 leads to the arrest of a young man by the name of Roderick Macrae. There’s no question that Macrae is guilty, but the police and courts must uncover what drove him to murder the local village constable. And who were the other two victims? Ultimately, Macrae’s fate hinges on one key question: is he insane? A story ingeniously recounted through the accused’s memoir, trial transcripts and newspaper reports, His Bloody Project is a riveting literary thriller that will appeal to fans of Hannah Kent’s Burial Rites. His Bloody Project was shortlisted for the 2016 Man Booker Prize.

Reviews of His Bloody Project

Praise for The Disappearance of Adele Bedeau: "Burnet skilfully knits together a solid detective story and a compelling character study to make a captivating psychological thriller … Very accessible and thoroughly satisfying." – Alastair Mabbott, The Herald.; "A character driven plot that is incredibly engaging. Rural France provides an alluring setting, while the writing is evocative and the characters intriguing. The Disappearance of Adele Bedeau is a great read." – We Love This Book.; "A strikingly singular talent, Burnet blends a gripping story with compelling characters and surprising sweeps of the imagination. This is an accomplished, elegantly written and exciting first novel." – Will Mackie, Booktrust.; "Burnet has completely nailed the tone, colour and sly wit … beautifully and convincingly drawn." – Michael J Malone.; "Immensely seductive" – J David Simons.; "This psychological thriller is the Scottish answer to the Scandinavian crime wave." – Leila Cruickshank, Scottish Booktrust Summer Sizzlers.