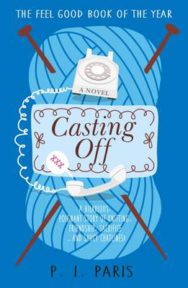 Home > Fiction from Scotland > Casting Off

When the residents of a Highland care home receive letters informing them that the new owners are about to substantially increase fees, their quiet days of knitting, chatting and trips to the local garden centre look set to be shattered forever. Dorothy faces the prospect of having to move out, something her good friend Miss Ross refuses to accept. But what can a group of elderly people do against a big organisation?The arrival of worldly-wise Joan soon galvanises the residents into action, stirring long-dormant passions to fight against injustice. After their protest march goes badly wrong, the residents get national news coverage when they barricade themselves into the lounge. However, their brief flurry of fame does not get the fees reduced.As the increased costs eat dangerously into dwindling savings, they need to make money fast or Dorothy will have to leave. When the irrepressible Joan suggests they set up a sex line for men who want to talk to older women ‘in a particular way’, their lives take a turn they could never have expected, with consequences that soon get out of control.Casting Off is a hilarious, poignant story of friendship, loyalty and sacrifice.It’s a story about never giving up and how reaching out to strangers can completely change our lives.

Author, playwright and journalist P I Paris lives in the Highlands of Scotland and is best known for the historical fiction and non-fiction books he wrote about the Italian chapel, built during WW2 by Italian POWs in Orkney. His contemporary novel, Men Cry Alone, broke new ground in raising the profile of domestic abuse against men.His stage play, Casting Off, played to sell-out audiences in the autumn of 2015. The hilarious storyline is taken to new heights in this latest novel by the same name.