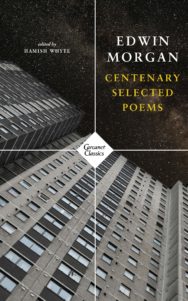 This is the third Selected Poems by Edwin Morgan from Carcanet, but the first since 2000 and the first to cover the full range of his poetry from his first collection in 1952 to his last in 2010, the year of his death at the age of ninety. All his different voices speak here – animals, inanimate objects, dramatic monologues by people, (famous people, unknown people and imaginary people) – in a multitude of forms and styles – sonnets, science fiction, concrete, sound, his own invented stanzas – together with his evocations of place, especially his home city of Glasgow, and a wide selection of his deservedly famous love poems. They all illustrate his incurable curiosity and a kind of relentless optimism for humanity.

Edwin Morgan (1920-2010) was born in Glasgow. He served with the RAMC in the Middle East during World War II. He became lecturer in English at the University of Glasgow, where he had studied, and retired as titular Professor in 1980. He was Glasgow’s first Poet Laureate and from 2004 until 2010 served as Scotland’s first Makar, or National Poet. He was made an OBE in 1982 and received the Queen’s Gold Medal for Poetry in 2000. A Book of Lives (2007) won the Scottish Arts Council Sundial Book of the Year. Carcanet has published most of his work, including his Collected Poems, Collected Translations, plays such as A.D.: A Trilogy of Plays on the Life of Jesus Christ and The Play of Gilgamesh and his translations of Rostand’s Cyrano de Bergerac and Racine’s Phaedra. Hamish Whyte, poet, librarian, editor and publisher, lived for many years in Glasgow before moving to Edinburgh in 2004. His most recent collection of poems is Things We Never Knew (Shoestring, 2016). With Robert Crawford he edited About Edwin Morgan (EUP, 1990), which includes his checklist of Morgan’s publications; he edited Morgan’s Nothing Not Giving Messages (Polygon 1990) and contributed to The International Companion to Edwin Morgan (ASLS, 2015). He also runs Mariscat Press, which published many of Morgan’s works. His memoir, Morgan and Me, will be published by Happenstance Press in 2020.