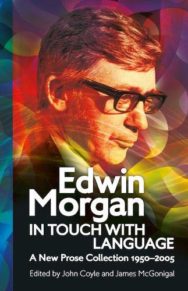 Edwin Morgan: In Touch With Language: A New Prose Collection 1950-2005

“I try to write something every day even though I am not writing poetry, just to get myself in touch with language.”-Edwin Morgan

Edwin Morgan (1920-2010) is one of the giants of modern literature. Scotland’s national poet from 2004 to his death, throughout his long life he produced an astonishing variety of work, from the playful to the profound. Edwin Morgan: In Touch With Language presents previously uncollected prose – journalism, book and theatre reviews, scholarly essays and lectures, drama and radio scripts, forewords and afterwords – all carefully moulded to the needs of differing audiences. Morgan’s writing fizzes with clarity and verve: the topics range from Gilgamesh to Ginsberg, from cybernetics to sexualities, from international literatures to the changing face of his home city of Glasgow. Everyone will find surprises and delights in this new collection.

Edwin Morgan was Glasgow’s first Poet Laureate, in 1999; five years later he was named as the first Scots Makar (Scotland’s National Poet). He studied and later taught English at Glasgow University, turning down a scholarship at Oxford University. The university’s creative writing department, bringing forth young poets and novelists, is now named after the poet. Morgan retired from teaching in 1980 to write full-time. He then worked as a Visiting Professor at Strathclyde University and the University of Wales.

He produced poetry, drama and literary criticism, and also translated poetry from many languages, including Russian, Hungarian, Spanish, Portuguese, German, Italian and French. Edwin Morgan won a variety of literary prizes, among them an OBE in 1982, The Queen’s Gold Medal for Poetry (2000), the Weidenfeld Translation Prize (2001) and the Jackie Forster Memorial Award for Culture (2003). In 1997, he was awarded The Order of Merit of the Republic of Hungary for his services to Hungarian literature. In 2008 he won the Scottish Book of the Year Award for his poetry collection A Book of Lives.

Morgan’s writing is noted for the range of literary styles it covers, from sonnets to concrete poems.

Edwin Morgan died in August 2010, his death mourned by many as the loss of a significant contemporary poet and Scots Makar. Following the announcement of his death, the Glaswegian poet and British poet laureate Carol Ann Duffy expressed her sorrow in saying, Morgan “was poetry’s true son and blessed by her. He is quite simply irreplaceable”.