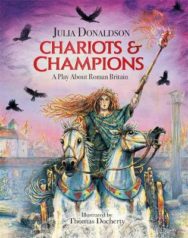 Chariots and Champions: A Roman Play

A short, illustrated play set in ancient Rome, perfect for class reading as well as performance, written by Julia Donaldson, author of the modern classic, The Gruffalo.Arthur Godbold discovers a bronze head of the Roman Emperor Claudius. As he tries to figure out how the head ended up in a Suffolk river, the dramatic story of the Roman invasion of Britain unfolds in front of his very own eyes.Emperor Claudius, British Queen Boudicca, ordinary Roman soldiers and British slave girls all appear in this exciting play, providing a variety of opportunities for KS2 classes to explore both historical and literary topics in an involving and creative setting.

Julia Donaldson, the 2011-2013 Children’s Laureate, is the prize-winning author of the world’s most-loved picture books including The Gruffalo and What the Ladybird Heard.The Gruffalo, illustrated by Axel Scheffler, is now a children’s classic; celebrating 20 years in 2019, selling over 3 million copies worldwide. It was voted Great Britain’s favourite bedtime story on BBC Radio 2 and was adapted and broadcast as an animation on BBC 1 on Christmas Day 2009. The Gruffalo’s Child and Room on the Broom are now also films, with Room on the Broom shortlisted for an Academy Award.Thomas Docherty is an acclaimed author and illustrator of children’s picture books including Little Boat, Big Scary Monster, and the Driftwood Ball. The Snatchabook, which was written by his wife Helen, has been shortlisted for several awards in the UK and US and been translated into 17 languages.