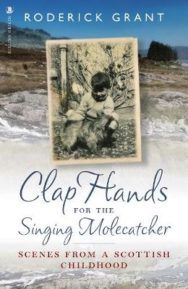 Home > Biography and Autobiography > Clap Hands for the Singing Molecatcher: Scenes from a Scottish Childhood

Clap Hands for the Singing Molecatcher: Scenes from a Scottish Childhood

Clap Hands for the Singing Molecatcher is both hilarious and deeply moving in its splendid account of the writer’s childhood on a remote country estate in Morayshire in the 1940s and 1950s; a place where isolated hill farms, limitless moorland and the rock-strewn banks of wild, tumbling rivers became the backdrop for a variety of adventures and experiences. Laughter, tragedy and dramatic incident thread their way through the life of a growing boy and the lives of the people he observes.Roderick Grant’s book is not merely one of nostalgic recall. It is a richly evocative memoir of a time and place when horses still drew ploughs and children walked seven miles or more each day to reach their school; and where shepherd and gamekeeper, farmer and labourer, forester, railway worker, teacher, laird and minister, and their families, were all part of a community, close-knit in its isolation from the changing post-war world.

Roderick Grant was born in Forres, Morayshire, in 1941, where he attended the local academy. He worked as a forestry worker, a journalist, a newspaper editor, a television presenter, a radio broadcaster, a bookshop manager and a postman. He also published writing in both Britain and the USA, including short stories and numerous books such as A Private Vendetta, The Clutch of Caution and Strathalder: A Highland Estate.