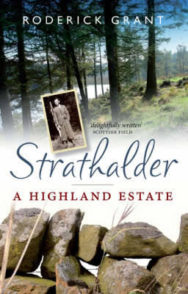 A passionate evocation of a vanishing way of life in the Scottish Highlands, “Strathalder”, when first published in hardcover, achieved critical acclaim both in Britain and the USA. Based on hundreds of interviews with gardeners, gamekeepers, maids, governesses, lairds, chauffeurs, cooks, and housekeepers, it is a portrait of the Scottish country estate in its heyday in the 1920s and as it is today.

Roderick Grant was born in Forres, Morayshire, in 1941, where he attended the local academy. He has worked as a forestry worker, a journalist, a newspaper editor, a television presenter, a radio broadcaster, a bookshop manager and a postman. He has been published in both Britain and the USA.