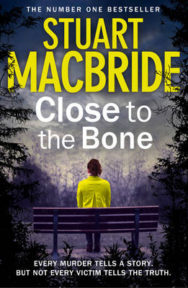 The third consecutive No.1 bestselling crime novel from the author of the DI Logan McRae series and Birthdays for the Dead. The first body is chained to a stake: strangled, and stabbed, with a burning tyre around its neck. But is this a gangland execution or something much darker? Someone’s leaving little knots of bones outside Detective Inspector Logan McRae’s house, but he’s got more pressing things to worry about. Rival drug gangs are fighting over product and territory; two teenage lovers are missing; someone’s crippling Asian immigrants; and Logan’s been lumbered with an ambitious new Detective Sergeant, a mountain of paperwork, and the unwelcome attention of his superiors and the local crime boss. When another body turns up, it looks as if the similarities between these murders and the plot of a bestselling novel are more than just a coincidence. And perhaps those little knots of bones are more important than they look…

Reviews of Close to the Bone (Logan McRae, Book 8)

Praise for Stuart MacBride: 'MacBride is the natural heir to the late and much lamented Reginald Hill' Andrew Taylor, SPECTATOR 'MacBride is a damned fine writer – no one does dark and gritty like him' PETER JAMES 'Fierce, unflinching and shot through with the blackest of humour; this is crime fiction of the highest order' Mark Billingham 'Some of the grittiest crime-writing in the field' Independent 'Admirers of tough, modern crime novels will be in seventh heaven – or should that be hell?' Express 'Ferocious and funny' Val McDermid 'Hard-hitting prose with a bone-dry humour and characters you can genuinely believe in, Stuart MacBride's novels are a real treat' Simon Kernick

Stuart MacBride is the No 1 bestselling author of the Logan McRae series and Birthdays for the Dead. The McRae novels have won him the CWA’s Dagger in the Library, the Barry Award for Best Debut Novel, and Best Breakthrough Author at the ITV3 Crime Thriller Awards. In 2012 Stuart was inducted into the ITV3 Crime Thriller Hall of Fame. Stuart’s other works include Halfhead, a near-future thriller, Sawbones, a novella aimed at adult emergent readers, and several short stories. He lives in the north-east of Scotland with his wife, Fiona and cat, Grendel.