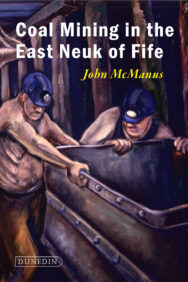 Home > Academic > Coal Mining in the East Neuk of Fife

Coal Mining in the East Neuk of Fife

Coal mining in Fife has an industrial history of four hundred years, although, in the East Neuk of Fife, despite many accessible and shallow deposits, the industry is long inactive. John McManus provides a survey of the geology and a history of the socio-economic factors that led to the rise and decline of the industry in this area.

John McManus BSc, PhD, DSc, FRSE, graduated from the Royal School of Mines, Imperial College, University of London. He lectured, first in the University of Dundee, later in the University of St Andrews, where he was appointed Professor in 1993. John McManus has published more than 200 scientific papers and an earlier book on mining in Fife, Mining between Ceres and St Andrews (Windfall Books, 2010), he continues to research the history of the mining industry in East Fife.