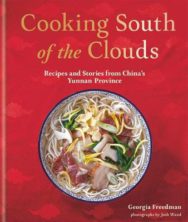 Cooking South of the Clouds: Recipes and stories from China’s Yunnan province

Twenty-four of the country’s minority groups call Yunnan home, each retaining their own traditions. Stretching from the Himalayan plateau down to the subtropics, Yunnan encompasses extremes from alpine meadows to rainforest. It is the most diverse region in China culturally, biologically, and meteorologically.On a culinary level, this means Yunnan is one of the most delicious places on earth. The region is famous for its mushrooms, hams, pickles, edible flowers, its use of potatoes, and its love of chillies and Sichuan peppercorns. Yunnan’s food is exciting and unfamiliar, but much of it is actually quite easy to make, using simple techniques already familiar to Western cooks. Each chapter covers a different area featuring its cardinal recipes such as Tibetan momo dumplings, Dai cucumber salad with peanuts, the famed “crossingthe- bridge” noodles of Kunming, Eastern-style fried rice with ham, potatoes, and peas, and roasted eggplant salad from near the Burmese border.Complete with profiles of local cooks, artisans, and farmers, as well as breathtaking on-location photography, Cooking South of the Clouds takes readers on an unforgettable journey through the land of Shangri-La and introduces a new world of flavours.

Georgia Freedman is a food and travel writer whose articles have appeared in Wall Street Journal, Saveur, Lucky Peach, Rodale’s Organic Life, and Zester Daily. She has been traveling to China to learn about the country’s culture and food since 2000. Freedman lived for two years in Yunnan, and has returned regularly,documenting her experiences at chinasouthoftheclouds.com.