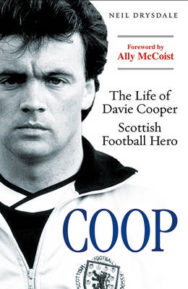 Coop tells the compelling story of Davie Cooper, one of Scotland’s greatest footballers – a man who excited and entertained crowds across the globe, whether with Scotland or Rangers or, later in his career, as part of Motherwell’s Scottish Cup-winning side in 1991. It paints a vivid picture of an enigmatic Scot, who relished the big stage, yet preferred to stay a local hero in the west of Scotland before his life was tragically cut short when he died from a brain haemorrhage at the age of 39 in 1995. Coop includes exclusive interviews with some of the biggest names in Scottish football, including Sir Alex Ferguson, Gordon Smith, Craig Brown, Tom Boyd, Bobby Russell and Andy Roxburgh. But it also gives the fans who applauded his talents at Rangers, Motherwell and Clydebank the chance to pay homage to his myriad gifts. It is an engrossing story of a true star and a heartfelt portrait of a man who was taken from us too soon.

Neil Drysdale is an award-winning sports journalist, who worked for Scotland on Sunday from 1988 to 2002 and covered some of the world’s biggest events, including the 1995 Rugby World Cup, the 1998 football World Cup and the 2000 Sydney Olympics. He now works for STV and The Herald newspaper, as well as compiling crosswords and contributing blogs to a number of publications. He has written four previous books, including a bestselling biography of Walter Smith, a richly-acclaimed account of Freuchie’s march to the home of cricket, Lord’s, in 1985, and a highly-praised history of Borders rugby. He lives in Aberdeen with his wife. Dianne. and their cat. Bark.