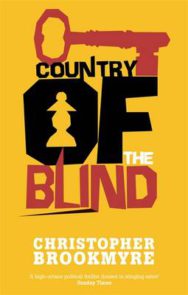 Home > Fiction from Scotland > Country of the Blind

Country of the Blind

The murder of a media moghul in his country mansion appears to be the result of him disturbing a gang of would-be thieves. The robbers are swiftly caught, but when they are unexpectedly moved to a different prison they escape. Back in Edinburgh, a young solicitor reveals to the press that one of the subjects had left a letter with her some time before the break-in which proves his innocence. Jack Parlabane, journo-extraordinaire, is intrigued, but when he approaches the lawyer he discovers someone else is trying to get near her – someone with evil intent, political connections of the highest order and a corrupt agenda. Fast-moving, blackly humorous and intriguingly credible.

Reviews of Country of the Blind