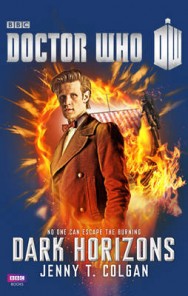 “We need to reach out. We need to continue the line…” On a windswept northern shore, the islanders believe the worst they have to fear is a Viking attack. Then the burning comes. Water will not stop it. It consumes everything in its path – yet the burned still speak. The Doctor encounters a people under attack from a power they cannot possibly understand. They have no weapons, no strategy and no protection against a fire sent to engulf them all. The islanders must take on a ruthless alien force in a world without technology; but at least they have the Doctor on their side…Don’t they? It is a thrilling adventure starring the Doctor, as played by Matt Smith.

Reviews of Doctor Who: Dark Horizons

"Well-written, amusing and Colgan perfectly captures Matt Smith's on-screen delivery in the dialogue" Sunday Express "A terrific tale with some surprising twists and turns – more please! 8/10" Sci-Fi Bulletin "A great story, told with flair and action to keep the fans glued to the pages" Press Association "A page turner for the fans and perhaps for more casual viewers of the series, although Dark Horizons may not come to be known as a Doctor Who classic, it's an entertaining adventure for Matt Smith's Doctor." Press Association "A pitch-perfect take on the eleventh Doctor, packed with mystery and action." Doctor Who Magazine

Jenny T. Colgan has written 13 bestselling novels as Jenny Colgan, which have sold over 2.5 million copies worldwide. Aged 11, she won a national fan competition to meet the Doctor and was mistaken for a boy by Peter Davison. She lives in France, and her favourite episodes are ‘Silence in the Library’ and ‘Warriors’ Gate’.