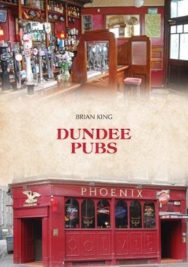 Situated on the Firth of Tay, Dundee is Scotland’s fourth largest city and was once a major east coast trading port. The Industrial Revolution heralded a time of great expansion, notably with the jute industry, and with its marmalade and publishing industries the city became famous for ‘the three Js’ – jute, jam and journalism. After its post-war decline, Dundee embarked on an ambitious regeneration programme and in 2014 it was chosen as UNESCO’s first City of Design. In 2018 the design museum V&A Dundee opened on the waterfront, and the dynamic city now attracts many visitors to explore its rich heritage and vibrant culture.In the late nineteenth century, Dundee was estimated to have more pubs per head of population than anywhere else in Scotland as well as several breweries. In spite, or perhaps because of this, the city later returned Britain’s only prohibitionist Member of Parliament, Edwin Scrymgeour.Many fin pubs were lost in the redevelopments of the 1960s and 1970s and more recent years have seen others disappear as social habits continue to change. The city still boasts many outstanding and historic pubs, though, some of them now listed buildings, and each with a fascinating story to tell. In the wake of the opening of the V&A Dundee – and the subsequent increase in visitor numbers – a new breed of interesting and quirky bars has opened, some of them giving fresh purpose to historic buildings.In Dundee Pubs, author Brian King takes the reader on a fascinating tour of the city’s most interesting, oldest and famous watering holes. Along the way he answers such questions as how did the Phoenix get its name and just who was Doc Stewart? Illustrated throughout, this book will be of interest to local residents, those with connections to the city and visitors.

Brian King was born and grew up in Dundee and has always had an interest in the changing face of the city. He now lives in Edinburgh where he received an MA (Hons) in History at university. He currently works as a professional searcher of public records. He still regularly visits Dundee.