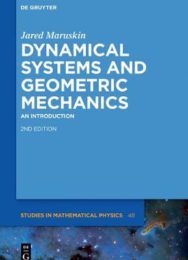 Introduction to Dynamical Systems and Geometric Mechanics provides a comprehensive tour of two fields that are intimately entwined: dynamical systems is the study of the behavior of physical systems that may be described by a set of nonlinear first-order ordinary differential equations in Euclidean space, whereas geometric mechanics explore similar systems that instead evolve on differentiable manifolds.The first part discusses the linearization and stability of trajectories and fixed points, invariant manifold theory, periodic orbits, Poincare maps, Floquet theory, the Poincare-Bendixson theorem, bifurcations, and chaos. The second part of the book begins with a self-contained chapter on differential geometry that introduces notions of manifolds, mappings, vector fields, the Jacobi-Lie bracket, and differential forms.