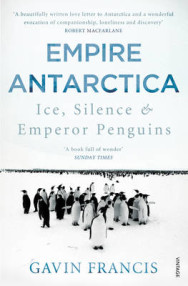 * WINNER OF THE SCOTTISH BOOK OF THE YEAR AWARD 2013 * *Shortlisted for the 2013 Costa Biography Prize* * Shortlisted for the 2013 RSL Ondaatje Prize * * Shortlisted for Banff Adventure Travel Prize * * Shortlisted for Saltire Book of the Year Award * Gavin Francis fulfilled a lifetime’s ambition when he spent fourteen months as the base-camp doctor at Halley, a profoundly isolated British research station on the Caird Coast of Antarctica. So remote, it is said to be easier to evacuate a casualty from the International Space Station than it is to bring someone out of Halley in winter. Antarctica offered a year of unparalleled silence and solitude, with few distractions and very little human history, but also a rare oppurtunity to live among emperor penguins, the only species truly at home in the Antarctic. Following the penguins throughout the year — from a summer of perpetual sunshine to months of winter darkness — Gavin Francis explores a world of great beauty conjured from the simplest elements, the hardship of living at 50 C below zero and the unexpected comfort that the penguin community bring.

Gavin Francis was born in 1975 and brought up in Fife, Scotland. After qualifying from medical school in Edinburgh he spent ten years travelling, visiting all seven continents. He has worked in Africa and India, made several trips to the Arctic, and crossed Eurasia and Australasia by motorcycle. His first book, True North, was published in 2008. His next book, Empire Antarctica, was shortlisted for the Costa and Ondaatje Prizes and won Scottish Book of the Year in 2013. He contributes regularly to the Guardian, London Review of Books, and the New York Review of Books. He lives in Edinburgh www.gavinfrancis.com