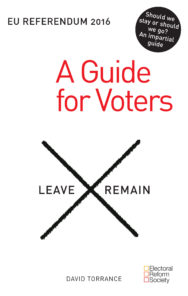 This is the question we will have to answer on 23 June, when we head to the ballot boxes to cast our votes in the in/out referendum on EU membership. It’s a complicated issue. What, exactly, would the much discussed ‘Brexit’ mean for the UK? With varied opinions on the EU from all over the political spectrum, do you know enough to make an informed decision?

This non-partisan guide features chapters on the history of Britain in Europe, the ‘Remain’ and ‘Leave’ campaigns, and the likely timelines following both a ‘In’ and an ‘Out’ vote. With maps illustrating the EU and EEA membership and clear exposition of issues key to the debate by journalist and broadcaster David Torrance, author of guides to the 2015 General Election and the Scottish Independence Referendum, this is the only guide to 2016’s referendum you will need.

David Torrance is a freelance writer, journalist and broadcaster who specialises in the politics and history of the long-running debate about Scottish independence. After being educated in Edinburgh, Aberdeen and Cardiff, he worked as a newspaper and television reporter before taking a brief career break to dabble in politics at Westminister. For the past seven years, he has been a freelance commentator as well as the author or editor of more than ten books about Scottish and UK politics, biography and history. Like all good Scotsmen, he has lived in London for long stretches, but is currently based in Edinburgh.