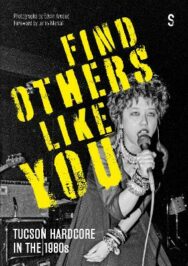 Find Others Like You: Hardcore Punk in the 1980s, Tucson, Arizona

Find Others Like You: Tucson Hardcore in the 1980s is a personal documentation of the 80s punk scene there with unseen photos of some of the most influential punk and hardcore bands of the era – including Black Flag, Meat Puppets, The Vandals, Conflict (US) and Suicidal Tendencies.By 1982, Hardcore shows in Los Angeles, San Francisco and Washington were getting large turnouts. It was becoming something that spoke to people, the freaks, the disaffected. Touring bands from all over would pass through Arizona on their way to or from somewhere. Word got out that Tucson had friendly floors to sleep on. A small, but meaningful scene. No barricades, bouncers, or cops. Crowds of forty people max.At nineteen years old, Edwin Arnaud was there. He saw, experienced and photographed the bands and the people in this book. The sights, smells, sounds, the kinetic energy, all in a single shot.Though there are plenty of other books documenting the hardcore scene of the 1980s, Find Others Like You is different because it happened in Tucson, Arizona.Tucson’s a warm city in the Sonoran Desert that has a real passion and a real heart and a real scene that wasn’t concerned with a permanent legacy; they just liked what was finally happening for them.To quote one of the legends of the scene, Henry Rollins, “Most of the people who call me a sellout were seven when I was down in the pit.” This book has the energy only an insider can bring.