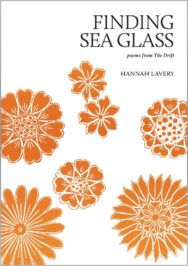 Exploring bereavement, belonging and rage, Hannah Lavery’s Finding Sea Glass: Poems from The Drift is a eulogy for her father and searingly honest portrayal of growing up mixed-race in Scotland. The pamphlet consists of poetry selections from The Drift, Hannah’s National Theatre of Scotland show.

Hannah’s voice is often quiet and loving, but she pulls no punches writing about both sides of the parent-child relationship, how we inherit and pass on race, and how Scotland constructs race and national identity.

Hannah Lavery is a Scottish poet, playwright and performer. The Drift, her autobiographical spoken word show, was part of the National Theatre of Scotland’s 2019 season and Black History Month 2019. Her play, The Lament for Sheku Bayoh, was commissioned by the Royal Lyceum Theatre, and performed as a work in progress as part of the Edinburgh International Festival 2019. She was awarded a Tom McGrath Playwriting Grant in 2015 for her play, British Book Of Trees, and a Megaphone Residency by the Workers’ Theatre in 2016 for The Drift. She also received Summerhall Lab support in 2019 for a new show about climate change titled Three Pints on a Sunday, co-written and performed with Colin Bramwell. She has had two short plays performed as part of Traverse Theatre’s Words, Words, Words and was commissioned to write a short play for the Lyceum Youth Theatre, performed by the company as part of their twentieth anniversary show in 2018. She has also been a featured poet at many spoken word and poetry nights including Neu! Reekie!, Sonnet Youth, Rally and Broad, Flint and Pitch and Loud Poets. Her poetry has been published by Gutter, amongst others. A first pamphlet of short fiction, Rocket Girls, was published by Postbox Press in 2018; a poetry pamphlet, Finding Seaglass: Poems from The Drift was published by Stewed Rhubarb Press in May of 2019.