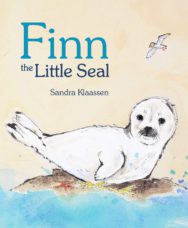 Finn is a baby grey seal. His mother tells him that one day he will swim in the sea, but the sea looks far too big to little Finn. He likes the rock pool, where he watches anemones and crabs.

Finn’s friend Sula loses her white fur and plunges into the water, but Finn still thinks the sea is far too big and scary.

Then one day a wave sweeps Finn off the rocks! Will he finally overcome his fears and find where he truly belongs?

Sandra Klaassen was born in 1959 in the Netherlands but lived for many years on the island of North Uist in the Outer Hebrides, Scotland, from where she drew her inspiration for Scottish picture books Peg the Little Sheepdog and Uan the Little Lamb. She has illustrated over thirty children’s books, including My Cat Mac, Mac’s Christmas Star and The Cat Who Decided.