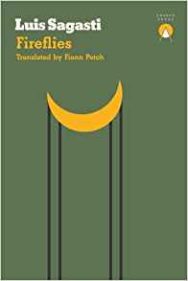 How do we even begin to narrate the history of the world? Where do we start, and where do we end? Fireflies is Sagasti’s bold and original attempt to answer these questions. Taking an eclectic array of influences and personalities from modern history, he teases out events that at first glance seem random and insignificant and proceeds to weave them together masterfully, entertaining as he enlightens. Joseph Beuys, Antoine de Saint-Exupéry, Stanley Kubrick, Neil Armstrong, Wittgenstein, Glenn Miller and the Beatles; poets and authors, priests, astronauts and Russian sailors all make an appearance, and Sagasti finds common threads to bind their stories together.

The fireflies themselves perhaps provide the key to understanding this book. They become a metaphor for the resistance of certain luminous moments, certain twinkling fragments of history, to the passing of time. They remind us that events do not always disappear neatly into the darkness, but rather remain, floating in the air, lighting up the night sky for years to come. Sagasti shows us that the present moment, like this novel, is a tapestry woven of a multiplicity of times.

Using his unique, poetic and keenly observant style, Sagasti turns the accidents of history into a single, lyrical constellation, and for the reader it’s an extraordinary sight.

Luis Sagasti, a writer, lecturer and art critic, was born in Bahía Blanca, Argentina in 1963. He graduated in History at the Universidad Nacional del Sur where he now teaches. From 1995 to 2003 he was Curator in charge of Education and Cultural Outreach at the Museum of Contemporary Art, Bahía Blanca, authoring numerous art catalogues for exhibitions. Including Fireflies (known in Spanish as Bellas Artes, 2011), he has published four novels: El Canon de Leipzig (Leipzig Canon, 1999), Los mares de la Luna (Seas of the Moon, 2006), and Maelstrom (2015). He also has a book of essays Perdidos en el espacio (Lost in Space, 2011). His new novel, Una ofrenda musical (A Musical Offering) was published in early 2017.