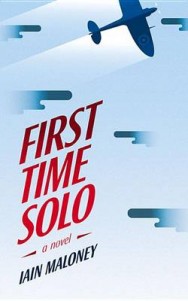 A gripping and ultimately deeply effecting literary debut, First Time Solo is more than a war story, it is a beautifully rendered portrait of men preparing for conflict and a society on the brink of seismic social change. It’s 1943 and Jack Devine, a farmer’s son, is finally called up to the RAF. Jack dreams of becoming a pilot, breaking hearts, and returning home a hero. The realities of training are very different, with boredom, bullying, and casual violence the norm. Drawn together by a love of jazz music, Jack makes friends with Terry, a worldly Welshman dabbling in the black market; Joe, an active Communist, as well as Yorkshire poet Doug. Jack, Joe and Terry form a jazz band to surprising acclaim and for a while an alternative future to that preordained for each seems possible. But the initial camaraderie soon gives way to simmering resentment as age-old tensions resurface, ultimately resulting in tragedy.

Iain Maloney was born in Aberdeen and now lives in Japan where he teaches English and writes about travel, literature and music. He studied English at the University of Aberdeen, has a Masters in Creative Writing from the University of Glasgow and as a writer of fiction, non-fiction and poetry has been published in journals and anthologies around the world. In 2013 he was shortlisted for the Dundee International Book Prize.