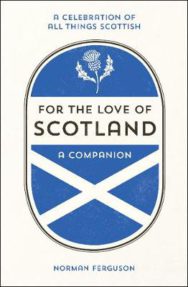 Home > Sports & Hobbies > For the Love of Scotland: A Celebration of All Things Scottish

For the Love of Scotland: A Celebration of All Things Scottish

Did you know? * Nessie is not the only monster supposedly living in a Scottish loch. Loch Morar has its own: Morag. * The first Open golf Championship was played in Scotland, at Prestwick in 1860. * As well as television, insulin, chloroform and the telephone, Scotland has given the world kaleidoscopes, contour lines, tinned salmon and Andy Murray. This miscellany of all things Scottish will have you quoting Burns, reeling off famous battles and fizzing with fascinating trivia in no time. As well as getting the low-down on the who, what, when and where of Scottish history – including profiles of William Wallace, Mary Queen of Scots and Bonnie Prince Charlie – you’ll gain plenty of insight into the food, drink, landscape, culture and everything else that makes Scotland exceptional.

Norman Ferguson has lived in Edinburgh and Glasgow, two of Scotland’s great cities but, as Billy Connolly says, on the other side of the world from each other – if you go the wrong way. He has produced three miscellanies for Summersdale: The First World War, The Second World War and The Battle of Britain.