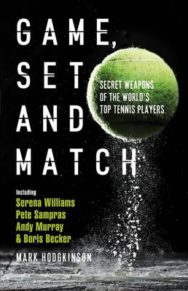 What better way to improve your tennis – and to gain a new appreciation for the sport – than by discovering the secrets of the world’s greatest players and coaches? Reading this book is to feel as though you are receiving personal tuition from the tennis elite, including those who have won Grand Slam titles and held the world number one ranking.Game, Set and Match: Secret Weapons of the World’s Top Tennis Players is an unprecedented collection of tips from the sport’s superstars, including Maria Sharapova, Andy Murray, Grigor Dimitrov, Eugenie Bouchard, Kei Nishikori, Pete Sampras, Steffi Graf, Boris Becker, Stefan Edberg, Milos Raonic, Caroline Wozniacki, Stan Wawrinka, Jo-Wilfried Tsonga, Bob and Mike Bryan, Martina Navratilova, Gael Monfils, Petra Kvitova, Ana Ivanovic and Marin Cilic.There is also advice from Roger Federer’s mother, Lynette on tennis parenting and tips from Rafa Nadal’s uncle and coach, Toni, as well as other leading coaches such as Patrick Mouratoglou, Nick Bollettieri, Paul Annacone, Marian Vajda, Judy Murray, Darren Cahill, Roger Rasheed and Robert Lansdorp, and from fitness experts such as Andre Agassi’s former trainer, Gil Reyes.Top tips from the pros include:`How to disguise your serve’ by Pete Sampras’Being a tennis parent’ by Lynette Federer’How to play a “tweener”‘ by Grigor Dimitrov

Mark Hodgkinson is a tennis journalist and author based in London; his books include Andy Murray Wimbledon Champion: the Full and Extraordinary Story and Ivan Lendl: the Man who Made Murray. He is also a director of Spin Sports and Entertainment, which created the official Fantasy Wimbledon game that first ran on Wimbledon.com in the summer of 2014. A former tennis correspondent for The Daily Telegraph, he has also edited the programme for the season-ending men’s tournament in London – the the Barclays ATP World Tour Finals, as well as writing tennis features and interviews for ESPN, Ralph Lauren, Credit Suisse, Barclays, the WTA, Wimbledon.com and BT Sport. Mark has also worked with the Roger Federer Foundation.