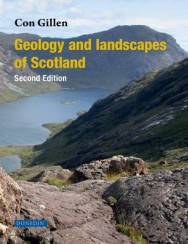 Geology and Landscapes of Scotland

In Scotland, the 600 miles between the northernmost Shetland island and the Mull of Galloway in the south contain some of the most interesting geology and most varied landscapes in Europe. This variety was the inspiration for a tradition of geological investigation that stretches back to the earliest Earth scientists. The origins of the Scotland that is known today lie in five quite distinct geological histories. This book takes the reader on a tour of each of these regions in turn, starting with the Northwest Highlands and Outer Hebrides, which contain some of the oldest rocks on Earth, through the mountain terrains of the Highlands and Uplands to the Lowlands, and then the fringes of the North Sea. One section describes the volcanic provinces of Scotland, another deals with the effects of the Ice Ages, while a final section looks at Scotland’s natural resources. The book will appeal to the professional geologist seeking a broad overview of a much-studied terrain. It will also be a resource for the resident, visitor, walker, climber, or angler who wants to understand the origins of the landforms they observe. Now in its second edition, Geology and Landscapes of Scotland has proved itself as a reliable guide and has been thoroughly revised with many illustrations presented in color.

Con Gillen is an experienced geologist, now with the University of Edinburgh, who has led many field trips across the country. Much of his teaching has been devoted to introducing geology to those new to the subject.