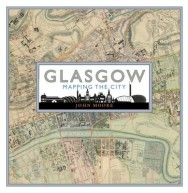 Maps can tell much about a place that traditional histories fail to communicate. This lavishly illustrated book features 80 maps which have been selected for the particular stories they reveal about different political, commercial and social aspects of Scotland’s largest city. The maps featured provide fascinating insights into topics such as: the development of the Clyde and its shipbuilding industry, the villages which were gradually subsumed into the city, how the city was policed, what lies underneath the city streets, the growth of Glasgow during the Industrial Revolution, the development of transport, the city’s green spaces, the health of Glasgow, Glasgow as a tourist destination, the city as a wartime target, and its regeneration in the 1980s as the host city of one of the UK’s five National Garden Festivals. Together, they present a fascinating insight into how Glasgow has changed and developed over the last 500 years, and will appeal to all those with an interest in Glasgow and Scottish history, as well as those interested in urban history, architectural history, town planning and the history of maps.

John Moore is a specialist on Scottish cartography and has published widely on the subject over a period of many years. He is currently Collections Manager at Glasgow University